So I have recently fallen in love with the series Experiment in Terror by Karina Halle and was fortunate enough to interview her.

As the self proclaimed daughter of a Norwegian Viking and a Finnish Moomin, you wear many hats.  Your stint as a music journalist is enviable and sounds quite adventurous.  Experiment in Terror has quite a lot of music thrown in and inspires some fashion choices which leads me to a few questions.

My parents musical choices when I was a child influenced me,  what music did you parents listen to when you were growing up and did they influence your listening habits?


Oh, same here, my father would play a ton of music on the boat when I was growing up. Dire Straits, Paul Simon, Johnny Cash, The Eagles and Bob Seger remain some of my favorites to this day.


We're close to the same age and the 90's were huge musically and MTV was still kinda relevant, where were you living in the 90's and was there a local scene you were influenced by?


I was in a suburb of Vancouver, BC, back in the 90s. I couldn’t tell you what the local scene was, but my friends and I (we were called The Skids) listened to a whole mess of stuff: The Ramones, Nine Inch Nails, Lagwagon, Marilyn Manson, Mr. Bungle, Daft Punk, Eminem, The Pixies, Bad Religion, Filter, Sonic Youth, The Misfits, etc.


What was the first show you went to?


Smashing Pumpkins, 1996 at the Moore Theatre in Seattle! They played half their show acoustic in their pajamas. Half was full on metal. It was amazing. My friend Kelli and I were two tiny fifteen year olds squished at the front. We saw Billy Corgan and Courtney Love twice (he laughed at me – long story), met Jimmy Chamberlain all drugged out of his mind in the lobby of our hotel. I was a fanatic in the making,


Do you play any instruments?

I love music to death but I am completely musically challenged. Can’t play anything to save my life. Although, I must say I am quite good at Rock Band drums.


In Lying Season we read about Perry doing karaoke, do you like to karaoke?  If so, what song is your "go to" song that you feel deeply and can knock out of the park?


I am the worst singer in the world, so I don’t sing. Ever. Except once. I did karaoke at Dimples in Burbank, California. I sang Queens of the Stone Age “Go With the Flow” – I have a copy of it on DVD that no one will ever see. If by “knocking it out the park”, you mean “make people’s ears bleed” then yes, I did that.


But back to your journalism career...
Having interviewed musicians that have inspired you, do you find it interesting that you are now being interviewed by those who have been inspired by your writing?

Yeah, it’s fun. I get super nervous when I interview celebrities and musicians, so I find being interviewed to be a much calmer experience. Only thing I miss is that “high” I would get after a great interview.

What is one of your favorite interviews you have given?

Billy Gould from Faith No More. I was the first journalist to interview him regarding Faith No More since they first broke up in 1998 – he even got in trouble a bit from the band for agreeing to the interview! I already knew him from this and that, but it was just amazing to sit down with him in this café on Haight Street in San Francisco and just talk about my favorite band for two hours. Best interview ever. Best feeling ever. Still get goose bumps thinking about!

Was it an easy transition going from journalism to writing horror?

Sure. I mean, I went to journalism school but I wrote Darkhouse before I became a music journalist. I always struggled with the rigid structure and lack of leeway in journalistic writing – fiction has always been my strongest talent, so the transition was pretty easy.


Since you wrote Darkhouse before becoming a music journalist, how long did you have to wait before it was released?


I wrote Darkhouse in the fall of 2009, started writing for Consequence of Sound in May 2010...spent most of 2010 covering gigs and writing for them, while working on Red Fox. I didn't decide to self-publish Darkhouse until May 2011...so it was quite a while. I kept meaning to query agents about it but I never got around to it. I thought self-publishing would be easier. NOT REALLY.

What musician do you think would be an ideal main man in one of your books?

Haha. Oh man. Well, I guess my Mike Patton love is quite apparent. So him, obviously. But I do think Josh Homme, Chris Cornell, Jack White, Trent Reznor and Rob Zombie would be amazing characters.

How have past/current relationships influence the way you write men in your books?

I think I draw my influences from a wide range of places: people I know, musicians, movies, other books, etc, but never from anyone I’ve dated.


How much of yourself goes into writing Perry's character?


There was definitely a lot of me in Perry when I first started writing Darkhouse but she and I sort of broke off and went our separate ways as the books progressed. I feel everything she feels (I guess I’m a masochist that way) and I can relate to her, but we definitely don’t act the same. I’m more of a risk taker than she is, and definitely more ambitious. I’m more honest, too, sometimes brutally so… and I’ve realized that honesty and risk go hand and hand. Interestingly enough, as I wrote the series, I found myself relating more to Dex and what he’s going through. We’ve shared many of the same problems/issues.


Is there certain music you listen to or a drink you prefer when writing? Do you have a ritual?


Usually it’s either wine or kava. And I have playlists for my books, so my music selection varies from each each book. I’m meticulous and specific that way – the music has to fit with the mood and scene or else it won’t work, and it has to be music that I know. I’d never select a random playlist from Youtube or anything like that.


If you were stuck in the Twilight Zone and had to repeat the same day over and over, what album, book and drink would you have everyday?

From one oddball to another, I want to say thanks so much to Karina Halle for taking the time to answer my questions and for making music relevant in her writing.  It was great to chat books, music, writing and to gain further insight into the characters I have grown fond of.  I  have experienced their highs and lows and felt their terror along their journeys.

Hey you guys!  Darkhouse, book 1, is still available for free on Kindle and Nook. 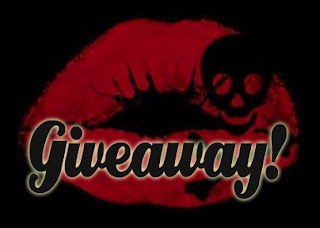 This giveaway is for winners choice of 2 of the books from the Experiment in Terror series.  Please note not all of the books are available in e-format on Nook.  Winner has 48 hours to respond with email address, their 2 choices and if it's Kindle or Nook.  Thanks and good luck!!!